Click here to read Dr. Watson's invited article titled "Evaluation of coastal response to Hurricane Ike through pre-storm and post-storm aerial photography"  in Shore and Beach Vol. 77, No. 2, 49-59.  This entire issue of Shore and Beach, the Journal of the American Shore and Beach Preservation Association is dedicated to description and analysis of the damage to the Louisiana and Texas coasts by Hurricane Ike which came ashore on September 13, 2008. 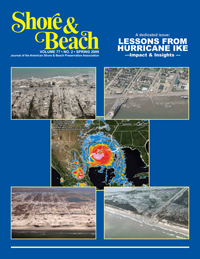 See also the following paper which is the introduction to this issue of Shore and Beach.

Hurricane Ike along the upper Texas coast: An introduction by Nicholas C. Kraus and Lihwa Lin
in Shore and Beach Vol. 77, No. 2, 3-8

Dr. Watson presented a lecture titled Ike wiped entire towns off of the map.  Are we safer in Port Aransas?  The presentation was made at the University of Texas Marine Science Institute in Port Aransas, TX on March 12, 2009 to a standing room only crowd.  The slide show includes before and after photos of the upper Texas coast destroyed by Ike, Ike's effects on Mustang and N. Padre islands, and comparison to past hurricanes and the flooding that they caused at Port Aransas.  You can click on the link below to watch and listen to this narrated presentation.  However, the file is very large, about 46 mb and it is probably better to download it and watch it offline.

Ike wiped entire towns off of the map.  Are we safer in Port Aransas?

Click here for tropical weather on Weather Underground, this is a great source for active storms and archived data and tracks on past storms.

Dr. Watson presented a talk titled Was Hurricane Ike a wake-up call, or are we going back to sleep? on January 15, 2008
at the museum of Science and Technology

The narrated presentation can be downloaded here.  It is about 28 mb and will take time to download.

Today (9/15/2008) I flew from Rockport, TX to High Island, TX and back.  I took over 300 photos of the damage from Hurricane Ike.  You can click on the link below to see these photos.  The towns of Caplen and Gilchrist are GONE!  The wind damage at Galveston is far less than the TV folks would have you believe, although there is a great amount of flooding damage, especially on west end.  Likewise at Surfside Village.


High resolution digital copies of many of these photographs are available for sale. You may purchase a digital photo in the highest resolution that I have for $25.00 for personal use or for use in your presentations.  The charge will be $150 for use in publications or for commercial reproduction.  Contact me  to purchase photos.  These photographs are copyrighted and are the property of Richard L. Watson.  They may not be copied or used without permission.  You may however link to this website from your website or by email.


View the NOAA photos in Google Earth.  You must have Google Earth on your computer.  This will allow you to see the high resolution NOAA photos with the streets labeled.


Here is a triple photo showing the Gilchrist-Caplen-Rollover Pass area in 1961 after H. Carla, in 2005, and in 2008 after H. Ike.  Photo prepared by Dr. James Gibeaut of the Harte Institute at Texas A&M Corpus Christi.


Here is a Corpus Christi Caller-Times article by Dan Kelley about Ike's damage to the dunes on Mustang Island.


Click here to view the response to Hurricane Ike by the City of Port Aransas, you won't like it!

Click here to view a KIII Ch3 news video about how the dunes protect Mustang and Padre Islands from overwash during storms.  When you get to the page, click on the video titled, "Padre Dunes will Protect Homes."


The owner of  http://www.ripcharts.com/ has provided the following two satellite photographs.  They show the inundation by Hurricane Ike as brown dead vegetation.  The red line shows an intrusion of 12.4 nautical miles.

The following graph shows the Hurricane Ike surge at a gauge on the north jetty at Bolivar Roads, the Galveston entrance channel.  Note that the wind and barometric pressure are included.  The water level is the level above Mean High Water as in the graph above.  Data obtained from the Texas Coastal Ocean Observation Network, Division of Nearshore Research, Conrad Blucher Institute for Surveying and Science, Texas A&M University-Corpus Christi.

Here is Ike's surge for the entire Texas Coast.

Here is Ike's track and intensity of history

Click here for a USGS paper on the Hurricane Rita Surge

Just in case you don't think that we are going to get any more tropical storms and hurricanes, take a look at the tracks of 150 years worth of storms!

Effect of Hurricane Carla at Port Aransas in 1961

The following illustrations are taken from Hurricanes as Geological Agents: Case Studies of Hurricanes Carla, 1961, and Cindy, 1963 by Miles O. Hayes, University of Texas Bureau of Economic Geology, Report of Investigations no. 61.


This first figure shows the wind field of Hurricane Carla.  Note that the hurricane force winds extended nearly the entire length of the Texas coast and inland almost to Austin.  Port Aransas sustained winds in excess of 100 mph even though Port Aransas is located far to the west of the landfall near Port O'Connor.  Carla was a large diameter, very powerful hurricane.

This illustration shows the distribution of the height of the water level, the hurricane surge from Carla.  It is interesting to note that his huge storm had only about a maximum 12 ft. surge on the open Gulf beaches.  The surge in the bay at Port O'Connor was at least 22 ft., 10 ft. higher than on the adjacent Gulf beaches.  This is because the storm filled the bay with water and then blew all of that water to the downwind side of the bay.  The hurricane surge is generally HIGHER in bays than on the open Gulf beaches.  We need for our natural dune seawall to be high enough and wide enough to protect us from hurricane surge overwash from the Gulf.  Even though we may still be flooded by water from the bay side of the island, there will be much less damage than if we are overwashed with direct Gulf surge topped by hurricane waves.

This photograph dramatically shows the massive erosion of the dunes on Mustang Island by Carla.  The sand that those dunes gave up helped to protect the town and bought time for the storm to pass.  The dunes have since rebuilt in the interim before the next bad storm.

Note that Hurricane Carla made landfall about 130 miles southwest of Rollover Pass.  It was a huge storm.

The following photo shows the repairs to the island road in the vicinity of Corpus Christi Pass after Hurricane Celia.  The road was cut at the bridges for quite a while after the storm.  This kind of damage occurs where there is no natural dune seawall to prevent overwash.

The following hurricane flood maps are from U.S. Army Corps of Engineers publications

The following two photographs show how Hurricane Beulah opened Corpus Christi Pass.  Note the highway bridge on the island road out in the middle.  This is far less likely to happen where there is a strong natural dune seawall.  Please excuse the condition of some of these old photos. They have survived several hurricanes.


Hurricane Allen has 8.9 feet of surge flooding on the beach at Port Aransas.  However, the Corps of Engineers did not produce any high resolution surge flood maps in their Allen publication.  While Allen had a significant surge, it did not overtop the dunes.  Allen did however significantly damage the island road down in the area of the bridges where there was little or no dune ridge for protection at Corpus Christi Pass and Newport Pass.  The following photo shows the island road destroyed by Allen.  This is what can happen where there is no natural dune seawall.